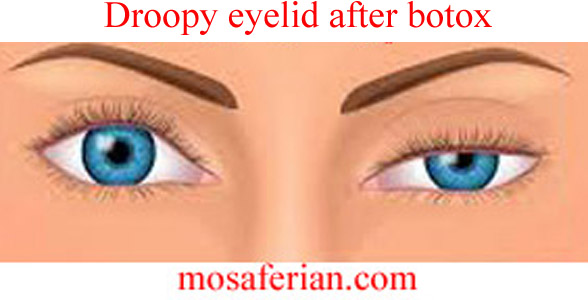 Botox is one of the best therapeutic weapons available for the treatment of facial dynamic wrinkles but it occasionally  migrates to underlying structures and  can result in a droopy eyelid — also called ptosis. True eyelid ptosis is a very rare complication following Botox injection. This occurs as a result of migration of the toxin into the muscle that raises the eyelid (levator palpebrae superioris muscle ).

How to avoid droopy eyelids from botox?

Corrugator supercilli muscle originates from the bone medially and attached to the superficial skin laterally so contraction of this muscle causess frown lines in the forehead. Traditionally glabellar area injected in 5 points to eliminate depressor effects of the muscle and prevent 11 lines in the midline.

Deep and high doses of botulinum toxin injection to the lateral portion of the corrugator muscle may causes diffusion of the product to the underlying structures such as levator palpebrae muscle and causes lid ptosis. Very small and superficial microinjecton of botox at the laterlal end of the muscle will prevent distal diffusion of the product. Moreover, for weak corrugator muscle and shallow frown lines changing 5 to 3 injection pionts strategy will reduce the risk of complications significantly.

How long after botulinum toxin does droopy eyelid occur?

Effects of botulinum toxin  (Botox, Dysport and Xeomin) peak between 3 and 7 days with 5 as the average.  One would expect droopy eyelid to occur by that time.

Botox is a temporary treatment  can last three to seven months, but the droopy eyelids will typically go away in 3 to 4 months completely  without any side effects to the eyes and vision.

Botox is always temporary and over time  lid will return to its normal position.  Iopodine drops do help this problem,  However the drops will help for a few hours at a time and then  lid will droop again until the Botox wears off.

Blepharoptosis occurs due to weakness of the levator palpebrae superioris muscle. Mean onset is 3–14 days after injection and eventually self-resolves after the paralytic effect of BoNT-A wanes. Administration of medications, such as oxymetazoline hydrochloride or apraclonidine hydrochloride eye drops, anticholinesterase agents, or transdermal Botox injections to the pre-tarsal orbicularis, can at least partially reverse eyelid ptosis.

study shows that a supraorbital foramen may be present in some patients and constitutes a shortcut from the brow area directly into the orbital roof, following the supraorbital neurovascular pedicle.